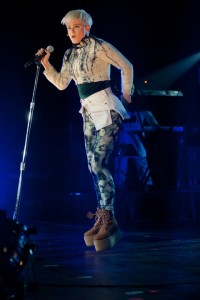 Robyn at Radio City Music Hall – Feb 05 2011
The crowd was absolutely fabulous. There were light-up swizzle sticks in the overpriced drinks. As Will said, the Gentlemen’s Lounge was probably the gayest place in town this night. When I came out of the stall I wanted to scream “enough with the skinny jeans, boys!” And at least one of them seemed to appreciate the prospect of a bit of upstate rustic rough. I was flattered, but I think he was pretty far gone already.

Robyn had two drummers and two keys and nothing else. They were definitely voice tracking for the chorus and there was little or no vocal improv. She had no back-up singers but I agree that she had the balls to pull it off. Lighting was minimal, high tech and only occasionally overwhelming. Sound was good, I was on the second mezzanine and it was a little muddy in the upper mid-range, but not bad. Bass was good when it needed to be. Little to no distortion overall. I did not have to use my earplugs.

The show was tightly scripted and well paced, with carefully chosen peaks and valleys. I was a little surprised that she did “Dancing on my own” so early in the show, using it as the first peak. There were also somewhat more songs from earlier in her career than I might have expected. “Hang with me” was a highlight, as we knew it would be. She did “You should know better” without Snoop. Second encore included “Konichiwa Bitches” and a weird and fun intro to “Show Me Love” using compatriots ABBA

The crowd was happy and upbeat and most stayed on their feet for the whole show. Robyn held the stage well and distributed her charisma well. She had one slight fall (the 4 inch platform Timberland-style boots can’t have helped) and the crowd roared when she got up without missing more than a beat. I think that she would benefit from formal dance lessons. But OTOH the gawkiness of her dancing (again with those boots!) was really endearing. Endearing too was her obvious pleasure in seeing huge crowd in such a great venue “This is the largest crowd I’ve ever pulled on my own”

There are pictures and a full setlist here: http://www.brooklynvegan.com/archives/2011/02/robyn_played_ra.html