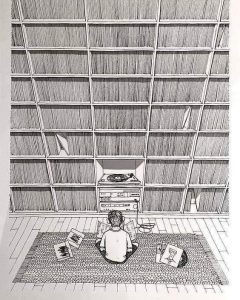 Yes, POOP has undergone its own partial shutdown this year. I’m referring to the fact that hard-copy analog POOP has gone the way of the typewriter, the rotary phone and voting rights in Georgia. Fortunately the 32nd Annual POmpous and OPinionated List continues on its long trajectory using the modern space-age digital format, with Mark Zip at mission control. We are in good hands. This year, 24 people have joined the caravan, a slight droop in the POOP.

Russia, if you’re listening, I hope you’re able to figure out how POOP’s tabulations are computed. From what I’ve heard, it’s the time-honored tabulation system, utilizing the customary What-The-Hell’s-He-Talking-About methodology. One more time, I’ve given 2 points to each pompoid’s Top 10 choices and 1 point to each title beyond a Top 10 or in the variously designated ‘honorable mention’ categories (up to 25 titles in all; more than 25 means half-points).

This year’s POOP is dedicated to the memory of Kevin Patrick Hodgkiss. About a decade before POOP was first hatched, Kevin and I started swapping Best Of lists, something we discovered we’d both been compiling for years. Kevin pretty much helped spark this 32 year old project and was one of three or four original POOPsters, contributing lists through 2008. He was my brother-in-music (read his real brother’s comments) and as sweet a human being as ever attended a Patti Smith show.

Thanks to all the contributors and to Mark Zip for maintaining this cyber Garden of Hedon. POOP contributors are encouraged to feed the kitty at the top of the POOP webpage. Zip explains that donations are used to offset domain fees and website hosting costs. And for hookers and blow.

Be the first to comment on "Main Poop Analysis 2018"