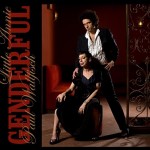 Caught Little Annie & Baby Dee at Joe’s Pub New York on Sunday night 26 September. Good show. Annie was in good voice (and need I mention also nattily attired in a black pantsuit)(and the same shoes she’s wearing on the cover of Genderful) and even managed to go mezzo for a couplea bits – especially her soulful take on Stevie Wonder’s Never Dreamed You’d Leave in Summer. Other classic covers included Yesterday When I Was Young and her take on Tina Turner’s (+ Dire Strait’s) Private Dancer featuring some new herky-jerky dance moves. Annie’s take on these modern cabaret tunes always strikes me as being tenderhearted yet tough, sentimental yet not maudlin, funny but not cruel.

Buncha new songs probably written with Baby Dee, as I guess she’s shedding some of the Paul Wallfisch repertoire. One song mentions going to prison in Valhalla, but Annie’s quick to point out that she doesn’t mean Valhalla in Asgard, but rather Valhalla, NY, home of the Westchester County prison (Annie’s from nearby Yonkers don’t forget). Annie’s interaction with her new accompanist is a bit more… catty and whimsical than her repartee with the more prim and proper Mr. Wallfisch. I also should mention that the audience at Joe’s Pub was almost a full house, which was quite different from some of the other times I caught Annie and Paul playing in some out-of-the-way places in Brooklyn for instance (Annie always puts on a good show even if there’s only a half-dozen people in the house). After a good night like this, Annie can probably pay off her credit card bill for those shoes.

Before Annie came onstage Sunday, Baby Dee sang and played harp on a half-dozen of her unique artsongs (Brother Slug Sister Snail being the audience’s favorite) with her usual violinist and cellist. Anything I have to say about Baby Dee won’t do justice to her performance – so see for yourself by checking out her Youtube videos for The Dance of Diminishing Possibilites (on piano) and Clouds (on harp).

Uh – I wonder what Sherwood would do for Baby Dee?