My POOP DISC-CLAIMER (disc-lamer?): Continuing the trend of my last five or so POOPs, 10 of the albums on my list are, in one way or another, throwbacks to older music. These days I seem to be meeting more and more people who similarly are in whatever demographic we aging consumers of music have become, all with similar buying habits. Record companies have not only taken note of our presence but they have discovered a new way to squeeze our new money from their old music. I am referring to the clumsily-large, ever-expanding, ever-expensive, super-duper-deluxe, limited edition collectors’ box sets of outtakes, unreleased songs and live shows, from albums I’ve already purchased, some of them many times over.

Full DISClosure: Some of these collections are so damn pricey that they have driven me to do an end run around my local record establishments (for which I feel tremendous guilt) and around the artists and record companies themselves (OK, less guilt). I hereby confess that for POOPlist items #12, #8 and #5, I was driven to cherry-pick and download tracks from box sets that were 7, 6 and 18(!) CDs respectively (although I did purchase the two-disc version of #5 from my neighborhood record merchant), and I did all this DL-ing from less-than-legal sources, spending less than 10 bucks on the whole kaboodle. Forgive me POOPsters, for I have sinned. The record companies made me do it. I have to admit it, though, it felt pretty good stealing from the very same record industry robber barons who were trying to fleece me. Occupy Sony!

1 – RHIANNON GIDDENS – Tomorrow Is My Turn and Factory Girl EP
These records have captivated me since their releases. I’ve since seen her twice, uncovered all the original versions of these songs, spoke to her after a show, Facebook-chatted with her, and come pretty close to stalking her ass. Yeah, she has NPR written all over her but that doesn’t detract from how incredibly talented a singer and virtuoso performer she is. Somebody throw some cold water on me.

Buy New or Used via Amazon    Rent via iTunes [?]
2 – J.D. McPHERSON – Let the Good Times Roll
J.D. brings even more burger-joint swagger to the table as he broadens his scope a bit since his first album, getting downer and dirtier this time around. Judging by this record and his performance at Club Helsinki a few months back, he’s one cool feller.

Buy New or Used via Amazon    Rent via iTunes [?]
3 – DARLENE LOVE – Introducing Darlene Love
There has always been a loose connection between “Christmas (Baby Please Come Home)” and the E Street Band, as if both were drinking water out of the same fountain. This record finds the common thread between sixties Girl Groups and any number of contemporary singers, many of whom contributed songs to this. And unlike just about every other aging rocker out there, Darlene still has voice. That same voice.

Buy New or Used via Amazon    Rent via iTunes [?]
4 – RYAN ADAMS – 1989
After he released about 200 albums in the last 20 years, I found myself pretty Ryan Adams’d out, but then he went and did this re-write of Taylor Swift’s album, highlighting some pretty catchy poptunes and wringing heartbreak and torment out of her surprisingly crafty lyrics. I’ve developed a new respect for Swift as well, for both the original 1989 album and for her penchant for flipping off the record business.

Buy New or Used via Amazon    Rent via iTunes [?]
5 – BOB DYLAN – The Best Of The Cutting Edge 1965 – 1966: The Bootleg Series Vol. 12
The double CD is a well-chosen representation of the 6 CD and, gulp, 18 CD collections. The three additional CDs I compiled from the deluxe and even deluxier editions hold their own as well. It is amazing to hear entirely different renditions of the songs that have become part of my musical DNA (Dylanoxyribonucleic acid).

Buy New or Used via Amazon    Rent via iTunes [?]
7 – VARIOUS ARTISTS – Another Day, Another Time: Celebrating the Music of “Inside Llewyn Davis”
This is a recording of the 2014 Town Hall concert inspired by the Coen Brothers’ movie. I enjoyed this record much more than I did the movie itself. This collection has wit, energy and fire about it. The movie did not.

Buy New or Used via Amazon           Rent via iTunes [?]
8 – THE VELVET UNDERGROUND – The Velvet Underground at the Matrix (CDs 5 & 6 from The Velvet Underground Deluxe box)
The six CD deluxe edition of the VU’s third album includes a two CD ‘Best of the Matrix’ collection, arranged like a complete show (the complete Matrix shows are also available elsewhere as a four disc set). Great sound and an excellent song selection make this a welcome addition to their canon.

Buy New or Used via Amazon    Rent via iTunes [?]
9 – PUNCH BROTHERS – The Phosphorescent Blues
Punch Brothers continue to dip their picks and bass bows into classical, bluegrass, r’n’r and the avant-garde while remaining none of the above. I pity the record store guy who has to stock this somewhere. Amazing musicians who never cease to challenge and intrigue.

Buy New or Used via Amazon    Rent via iTunes [?]
10 – THE MAVERICKS – Mono
Raul Malo has as good a voice as anyone this side of Orbison. Especially in person, Malo and the Mavericks deliver percolating Cuban-by-way-of Mexico ska beats but Malo can also croon at the moon with the best of ‘em. Honorable Mention: the live CDs they made available within a week after their concert appearances this fall.

11 – JIM LAUDERDALE – Soul Searching: Volume 1 Memphis, Volume 2 Nashville
Jim Lauderdale has always been a country music chameleon. On his latest, he devotes a disc each to music inspired by Memphis soul (replete with horns) and Nashville rock. What pulls both CDs together (and in fact his entire career) is his heartfelt singing, cooked up just right.

12 – BRUCE SPRINGSTEEN – The Ties That Bind (CD 3, the out-takes CD from the box set)
The outtakes CD in this box is a very worthy companion piece to The River. Just not worth the $95 price tag of the entire set. Gouged in the U.S.A.

13 – DAVE RAWLINS MACHINE – Nashville Obsolete
A less-is-more approach lays the foundation for the lonesomest sounding record of the year.

14 – RICHARD THOMPSON – Still
RT doesn’t have many surprises left in his arsenal but he can still be relied upon for terrific songs, poignant lyrics and the usual stellar guitar playing. This record boasts an especially clean sound too.

15 – VARIOUS ARTISTS – Here Today! The Songs of Brian Wilson (UK import)
This collection presents a w-i-d-e cross-section of artists doing Brian Wilson songs in records made between 1964 and 1994. It’s full of melody, surprises and the usual Ace Records scholarship in the liner notes.

16 – CORB LUND – Things That Can’t Be Undone
Alberta’s Corb Lund might be called a country and northwestern singer. He approaches every topic he sings about with a wry wit and crack musicianship. While he’s a clever songwriter and a good showman, he’s also a real deal Canadian cowboy.

17 – POPS STAPLES – Don’t Lose This
The title comes from a conversation between a dying Pops and his daughter Mavis as he gave her a not-quite-finished tape 15 years ago. With Jeff Tweedy’s assistance, the album delivers bare-bones gospel soul over Pops’ trademark Fender tremolo.

KINDA, ALMOST, MAYBE
18 – COURTNEY BARNETT – Sometimes I Sit and Think, And Sometimes I Just Sit
19 – YO LA TENGO – STUFF LIKE That THERE
20 – STEVE EARLE – Terraplane

BEST MUSIC MOVIE OF THE YEAR: Love & Mercy
Not only a great music film but a great film. Paul Dano deserves something. 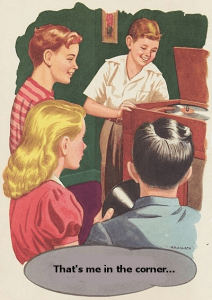