The Events
The biggest musical event of my year was The Boston Calling music festival. I’ve avoided festivals for the last 20 years or so and approached this with some trepidation, fearing a sweaty mass of humanity and my hysteria level of claustrophobia. The Replacements though, I had to go. My fears were assuaged immediately upon entering the beautiful and comfortable brick and concrete park smack in the middle of downtown Boston. Neutral Milk Hotel were great but a bit pretentious. As I expected. The Hold Steady had the unenviable task of playing under a searing sun and a heat index of 102. They absolutely killed it mixing new tracks and stand out shout along classics. My brother in law was so impressed he immediately went out and bought their entire catalog. Bleachers were good stupid fun and 21 Pilots put on one of the most energetic sets I’ve ever seen. Lorde was captivating and much better than I expected.

So, onto Sunday. I ignored the band playing on Stage B so I could get set up for The Mats. Grabbed two beers and was stunned to just walk right up to the barricade. Front row center was never so easily attained. When they hit the stage and ripped right into “Favorite Thing” I was overwhelmed by the energy and pure force of the band. It only got better as strangers embraced like old friends and Paul and Tommy 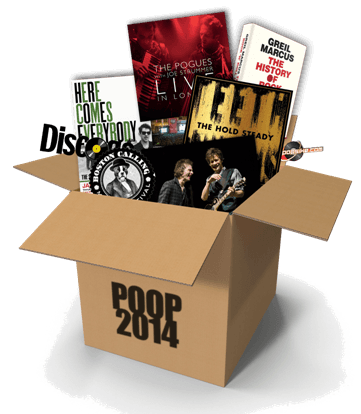 seemed to having the time of their lives. I’m not ashamed to say that at some point I cried. Something about redemption and misspent youth and somehow still be around to be awed by the power of music. And sharing that deeply personal event with hundreds of people who know exactly what I mean.

The Music and Books
I didn’t listen to much new music this year but my obsession with buying, selling, and listening to records reached an alarming level of addiction. I fear I’m a full-scale vinyl dork. I’m the new Brooklyn.