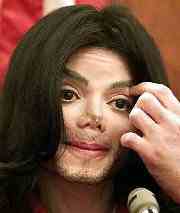 Surely no artist held a candle to the wonderful weird wild Wacko Jacko. I dare Marilyn Manson or GWAR or Karen Finley or Mariah Carey to try to top this wonderful conceptual art guru who has emerged from the depths of a bathtub filled with naked 14-year old television boystars to become the Performance Artist of the Century!

Imagine! Producing an album that didn’t sell even though it had a $30million publicity budget! And then to accuse Tommy Mottola of being a bad boy and denying black artists the royalties and respect due them. And then people like Russell Simmons remarked that he could probably make 30 hit albums for that kind of money, and where was the Jackson family when the R&B Foundation was trying to get older blues and R&B stars some money to pay for their healthcare costs, and why did the Jacksons systematically exclude black promoters from their tours? (Come to think of it, Jacko did succeed in getting Mottola fired)

But that all paled compared to Jacko’s “Hey honey, I threw the
kids from the balcony” tour! And those of us in the know figured that his ploy of dressing his kids in burkas for their visits to the zoo was probably an attempt to sell some records in Afghanistan – well, he’s got try to be no. 1 somewhere!

And finally there was the piece de resistance, or should I say, the Sir Nose D’Voidoffunk! A nose with 3 holes! Noses popping off in first class! And noses peeling and falling off in court! And is that some kind of airfoil on his hose in the photo that accompanies this PoOp scoop?

Now, there are some who claim that Jacko is trying to become Diana Ross or Brooke Shields, but one look at this photo and you can see that he’s trying to become the Scarecrow from The Wiz! The Wiz was his only Hollywood leading role, and he’s dying to be in a remake! Look! He’s perfect for the part!

And to Brian Eno for coming out as an anti-war activist this year.

FAVORITE GIGS OF 2002
Top gig was U.Roy with the Downbeat Sound System and DJ Kool
Herc at the East River this summer! At one point U.Roy, Coxone Dodd and Kool Herc were on stage at once – essentially the men who invented the music of the last 10 years.

IABAS are still kicking booty, whether at the Mid Hudson Children’s Museum or at Rosendale Café. Percussion sounds from another hemisphere were the wonderful Gamelan Surya Kanchana at the Holy Cross Church in Kingston.
Ari Up, Peter Stampfel and an amazing acoustic set from Baaba Maal at a Village Voice benefit for their 911 benefit album. How about that Ari Up & Nina Hagen gig this summer! Don’t we know a lot of people! Peter Stampfel, not well known as a protest singer, came up with “President Bush / Can kiss my Tush / Deep in the Heart of Texas” at a CBGB’s gig this summer. And props to Angel Dean & Sue Gardner who brought back fond memories of Shackwacky at the same gig. (Yo! to Yo La Tengo!) The Raymond Scott Orchestrette are a real gas – I caught them at the Colaburgh Lodge in Croton this spring. Other props to Calvin Johnson, Joshua Rifkin, the Battlefield Band, Lindisfarne, Gary Lucas, Michael Hurley and Little Annie for wonderful evenings! And let me not forget Vivian Goldman’s great lecture on the history and mystery of reggae. (She was dancing at the U.Roy gig too) Not forgetting John Cale’s set at the Harvestworks benefit/ tribute to Robert Moog, with Judy Nylon as MC!

RADIO ACTIVITY:
As usual, Vassar’s WVKR, 91.3, is still the best in the valley, and shout-outs must go to Geet Mala with Padma, to the Polka shows with Mike and Terry and with John Sagan, and to my favorite, reggaespectrum.com with Dexy B and Supa T for the best in reggae and rocksteady! Other props to the Fancy Broccoli show and Diggin’ in the Crates – where Funk liveth itinually.

UNDERCOVER BROTHER: – (this year’s Pootie Tang, with a bigger budget)
THE COCKETTES: – all of the above, plus Divine, Sylvester, and Hibiscus

THE PRESIDENT MASH UP THE RESIDENTS: (Musts to Avoids):
Ginger Geezer – the Life of Vivian Stanshall by Lucian Randall & Chris Welch – funny enough at the start, but as Stanshall descends into sunken boats & sunken ambitions, it gets really depressing.

Top Ten CD PICKS for 2002
1.Michael Jackson’s 2002 album (Can’t even remember the title)(Who cares about the music, the (unintended) publicity campaign was the all-time best)

3. Le Tigre – Remixes (Feminist Sweepstakes shoulda been on my 2001 list)

6. Ladytron – Light & Magic (Copying everybody from Kraftwerk to The Normal to Lori & The Chameleons to… Virna Lindt (tho’ not as funny as Virna Lindt))

Top single and EP tracks PICKS
1. Salmonella Dub – Outside the Dubplates EP (bought it for the On-U mix, but the Dreadzone & Groove Corporation mixes are even better)

Be the first to comment on "Jim Finnigan Poop 02"