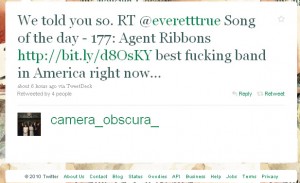 Where we learn about a new band we’ve not heard before. And we get to hear them on videos we’d not seen before.

We learn that there is a CD from 2006 (now apparently out of print) and that there will be a new CD forthcoming on October 12, 2010

And finally find out the they are playing a show in NYC September 19th, a day we cannot go…