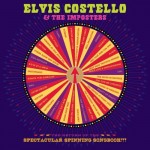 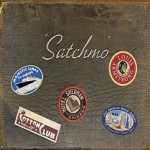 On his official site, Elvis Costello (or his minions) have posted a funny screed about the ravishing cost of his new recorded music fetish object

(formerly known as “a record”). His point is that the Super Deluxe Edition is overpriced at $202.66, even if does include a whole bunch of extras in addition to the CD/DVD/10″. He goes on to endorse the 10 CD Louis Armstrong “Ambassador of Jazz” box, says that the component parts of his own set will be available cheaper in the new year and winds up acknowledging, in not very veiled terms, that fans might choose to obtain the box set via “unconventional means”.

(Presumably) following the coverage of the “Steal this Record” post, the blog posted a follow-up entitled “Let’s make things sparkling clear“, which contains the following paragraph:

If you should still want the component items in the above mentioned elaborate hoax, they will be available separately at a more affordable price in the New Year, unless you are one of those pirates who imagines they are evangelists or that other people’s rights absolve their own thievery, in which case this is between you and your dim conscience.

So there. That’s the pirates AND his record company told. Got it?!