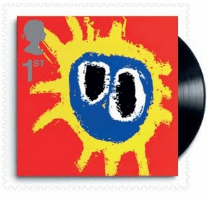 Now that the stamps are officially released, here’s a good page showing all ten of the stamps. Also includes details of  the custom franking you can get.

Amazingly, I have a quarrel with only one of the choices. can you guess which one? Which ones would you argue with?

Brief discussions of the project and each of the covers here (www.independent.co.uk)