On January 27th the USPS will be raising postal rates. The First Class Forever stamp goes up by 1 cent. Other First Class prices also go up by 1 cent. Priority Mail goes up by 6 to 10 percent. other rates go up by similar amounts. But hidden among the run-of-the-mill price hikes there is one rate chart which is threatening to kill off international mail order sales. This is a new rate called First Class Parcel International Service (.xls)

We see lots of stories about how vinyl is bucking the downward trend in physical media, but imagine being an indie music fan in the UK and wanting the latest slab of wax from your friends at Third Man Records. A slab not being imported by distributors in the UK. An LP record with packaging weighs between 16 and 20 ounces. The rate for that is currently $13.17. On January 27th it will go to $18.60, an increase of 41%.

IF you really wanted to kill off physical media sales abroad, you could not have thought up a better way. Makes me wonder if Hollywood might be talking to the USPS. The fewer physical objects of cultural expression in the world, the less you have to worry about those pesky First Sale Doctrine arguments…

I’ve made a chart comparing the old rates against the new. It also shows the percentage increases for each rate, within rate bands and overall increases too: New USPS Rates vs. Old – First Class Parcel International Service (PDF) 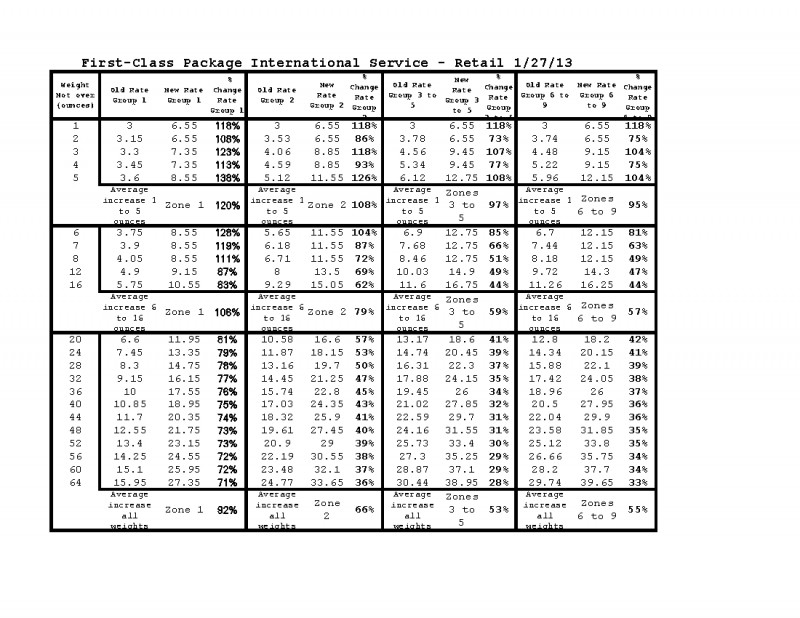 Click on the image to get the .pdf of the chart.

Be the first to comment on "Are the USPS’s New International Postage Rates the Final Nail in the Coffin of Physical Media?"